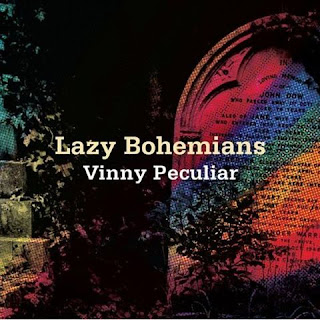 I’ve just had the web site go down on me, like Elton John’s sun…so I thought I’d start another blog page and this is it. So hello and welcome to anyone chancing upon this here confessional. The problem that caused the https://vinnypeculiar.com/wp2020/ site to fail was unsurprisingly my fault. The server renewals notice got ignored so the content went up in cyber smoke. It’s annoying but I still have a version here on the hard drive although a lot of the newer stuff is lost but should be back after a fashion by the end of the week. James the web designer [who called me to advise] assures it’s a piece of cake all this re formatting via a new server lark and what’s more I believe him. I’m gullible like that.

On Thursday night I’m playing a solo at TV21 here in Thomas Street, Manchester, it’s a nice little venue; do come along if you’re able. We played a band show there on the last tour [terrible picture above] which was really well received. It’s a shrine to all things Gerry Anderson with a real Parker puppet in a glass case. It’s the kind of place that has you mooching around at the artefacts in no time. The venue is its own ice breaker so if you come alone the exhibits will take care of you. I’m sharing the bill with none other than Jake Shillingford from My Life Story. I like a challenge and have nothing to lose so I’m planning on doing a brand new set of songs that were all written in January this year. My love was away on a yoga camp at the time hence I had nothing better to do. The trouble with so much new material is that I can’t for the life of me remember all the lyrics [I tried in vain in a run through last night but it was hopeless] so am planning to use the lyrics as a kind of kitsch prop. I know it’s not cool just because everyone does it at Arena shows and no I don’t have a see through auto cue [just a music stand I got off eBay]. I’m just finding it harder to remember the words to all the new songs. They will, I assume, take a few more goes to embed themselves. I suspect this is also to do with the associated memory loss of middle age. Anyway, it’ll be a temporary thing [I think], and hopefully it won’t detract too much from the performance. I’m sure nobody’s arsed either way. I just thought I’d mention it.

I had a bit of a Once in a Lifetime moment this afternoon in PCt World when I said to myself, ‘how did I get here’. Such moments seem omnipresent and letting the days go by is such a poor excuse. I must try harder, really I must. VP