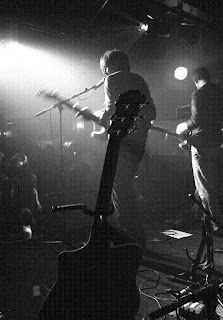 A few people have emailed me to tell me the site https://vinnypeculiar.com/wp2020/ is showing stuff from August 2007 and they’d be about right and of course it’s all my fault. I forgot to pay the server host people who wiped everything from their hard drive leaving me with an older version of the site. I appear not to have saved the local files, so not good really, still all this should be remedied soon, although it’ll probably take me awhile. I just need to check out a few tekky things with a mate before I jump in as I don’t want to lose more than I have done already. I feel remarkably calm about it. So there you go. I must be maturing or something. The myspace site has the gigs and blogs too should you need to check on my where abouts.

Last nights gig at Manchester’s most sexylacious TV21 came and went off really well. It was a pleasure to see Paul and Steve Petrico again and tell them apart, it’s taken me awhile but I got there in the end. Some good friends of Steve’s have recently moved to Berlin and Steve did a good job on convincing me I should go live there too. I must investigate. I’ve always wanted to go and never quite got round to it.

Tonight I was opening for Jake Shillingford of My Life Story, a really nice guy, we chatted a bit at the sound check but I missed his set due to a car park curfew which I made with only seconds to spare as I couldn’t locate the pay machine. It’s not the first time this has happened. I think I’ll email Jake and try and the musician swap CD thing, his stuff sounded great at the sound check, stripped down 12 string and piano. He was wearing pair of pointy white zipper shoes like the ones off the Joe Jackson album cover; the one with Different for Girls on, look Sharp I think it’s called and they looked great. And his 12 string stays in tune which always helps.

There was a smoke machine at the venue which bellowed off mightily throughout my set. I can’t say I like them; the vapours cling to the throat and make me cough something rotten. I’m the same around hairspray; I imagine they have similar chemical properties [without any evidence whatsoever]. I played Big Grey Hospital for the first time since my brother died. This was a bit of a landmark for me and at one point I found myself feeling a little choked [I think the term is] but no one noticed and I came on through. I was surprised how easily I remembered all the words. I was home in time for Newsnight and that was that. VP